The Tobacco Factory for lunch on a Sunday did not offer a roast. Instead, there were some warm brasserie style lunches, baguettes, English muffins and a selection of tapas dishes. 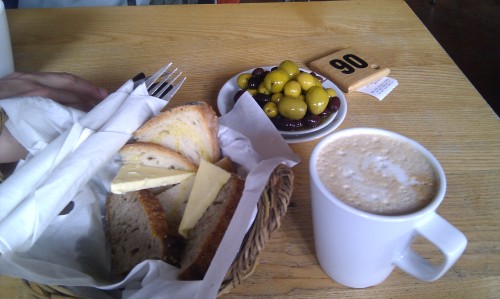 The bread was lovely, from Mark’s Bread across the road, and was firm of texture with a harder crust but not too tough. The selection was made up of white and brown bread drizzled with olive oil and supplemented with two triangles of butter. The first basket had five mediocre sized pieces while the second had a better amount.

The patatas bravas were roasted new potatoes, seasoned with salt and pepper and parsley. I say seasoned but most were barely flavoured while the rest were nice but the pepper was not entirely appropriate. The tomato sauce / salsa accompaniment had no seasoning at all and I didn’t bother with it after a couple of tastes. The humous was chunky but not too rough although again there was no seasoning apart from parsley and cumin. Salt was not a big factor in the meal at all (the butter was unsalted as well). The best dish was made up of the green and brown olives which were nice and the portion was a good size.

The vanilla soy latte was pleasant and tasty and the green tea was pretty standard and drinkable, apparently.

The meal was nice although it wasn’t meant to be more than a snack. It wasn’t amazing and could have done with more seasoning but it was worth the money. The environment was the most enjoyable aspect to the midday break. The room was large and most of the tables were full, families with little children, men on their own with newspapers and books, gatherings of young women and random urban professionals passing by. The space was large enough to make the conversations a slight noise in the background which allowed for comfortable talk and some semblance of privacy.

I suspect I’ll try a different dish next time and English muffins sounded very good. £5 for one of four selections including mushroom and cheese and smoked salmon with cream cheese. For an additional 50p each you can add a poached egg as well. Sounds ideal for brunch.