Commonplace and yet miraculous

Dad and I were having coffee and cupcakes the other morning when I mentioned that if he ever wanted to know what a baby that we made would look like, he just had to look at Mersi. In response, he demonstrated his ability to convey sarcasm in a glance without needing to roll his eyes. Impressive. Then went back to his father daughter chat about who was a silly sausage.

I am, on the other hand, still impressed by my profound thought and have started regressing to a stage where I find this whole co-mingling of DNA to be an incredible happening. My friend Mark, commented once that if having babies wasn’t so commonplace that it would be seen as utterly miraculous. So true.

My thoughts, when I first had the baby, were very much focused on ‘protect’, ‘defend’ and ‘feed’. I knew she was beautiful, I had eyes after all, but everything felt practical rather than spiritual. I spent three days in hospital after giving birth and by the third I had slept maybe eight hours out of the previous 96. I was drifting in and out of consciousness and I wasn’t blacking out but would see little scenes of dreams for seconds at a time before snapping back into being awake.

The first night my housemate and I brought the baby home we ordered a Chinese take away and I went off to sleep while he watched her. He came to wake me up an hour and a half later and I could not understand what he was saying. He managed to convey she needed feeding as she had been screaming in her frantic tone. Poor, poor baby.

The tiredness hasn’t been as bad since but it did get exhausting for a while which I can only appreciate now that I’m starting to perk up. I’ve started taking people’s advice to sleep when she does. My lucidity has happily combined with baby’s new tricks of waving her arms about more, keeping her gaze focused for longer, smiling and even chortling in her tiny way.

She is the most miraculous baby and I have started to collect moments of wonder about her. Yesterday she stared over my shoulder for over five minutes at the book case and the wall. Stared fixedly while I held her up and she’s not light (11lb, 12ozs at last count). The picture in her birth announcement is from her baby registration day and taken at Source food, now forever to be held in the annals of the Bristol Evening Post and wherever their archives get stored. She smiles at random times which I can’t quite predict yet but I do find time stops while I wait for her to do more. She has also started to follow me with her eyes now, a trick she learned only last Tuesday so now I worry that she’ll get upset when I’m gone.

We were separated for over four hours last Friday when I went out for dinner. By the time I came home I vowed never to leave her again. I sat across from a lovely couple who were pregnant, had a 17 month old baby boy and were personal trainers. I managed to fit in baby talk and the London marathon in pretty much every discussion for the entire evening and showed off pictures too.

I came home and there she was, this amazing tiny miracle. 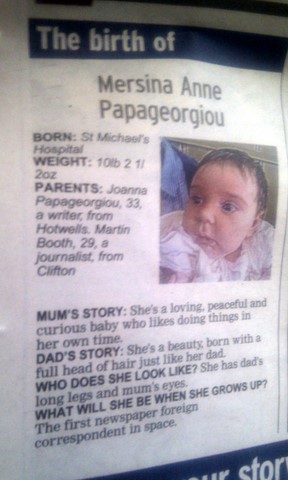