The Bristol Council and Cathedral today announced that they are starting proceedings to evict Occupy Bristol from their position in central Bristol.

The ugly mess that they occupy at College Green is offset by the message ‘excuse us for the inconvenience we’re only trying to change the world’. It has been a few months since the tents moved into their new home but the world hasn’t changed and the mess has got even uglier.

As ugly as the money the bankers took from the state? As ugly as their bonuses and the peoples’ lives they’ve destroyed? Countries have fallen apart, unemployment is increasing, train fares, consumer prices, costs are all rising. How much of that can we blame on the banks? A lot of it apparently and the rest to the 1% perhaps.

The Occupy movement is a breath of fresh air in actively making their anger known about the corruption and disparity in society. One of the best things about the Occupy campaign is the call to move our money from the banks to building societies and co-ops that are owned by us.

It’s a brilliant idea and yet I only heard about it when I sought out OccupyBristol website and searched through the posts.

On Twitter and online I had only been noticing some messages from individuals about how great it is to talk to various people such as Buddhist monks, philosophy students, etc. all with very liberal and cultural leanings. This was of little interest to me although part of the Occupy movement is to work towards the kind of world we all want.

Fighting against the inequalities of those who have against those who don’t is something I fully support. An inactive squat in the middle of what was once a peaceful and aesthetically pleasing area in central Bristol isn’t much of a sacrifice if it was being used to change the world. I don’t see much evidence of this change and since the people living there are representing me, as part of the 99%, I think the burden is on them to at least promote their intentions.

However I am also open to the idea that we don’t hear about the intentions about this camp because the local media aren’t very helpful in promoting it. That may be so, I don’t know. I do know that the other big news about illegal occupations at this moment in time are in reference to the Costa franchises which are illegally running without proper planning permission. The Bristol City Council have said that the law works slowly which is why they aren’t shut down yet. Let’s see how quickly eviction takes place on some citizens unarmed with a big corporation’s money and power behind them. 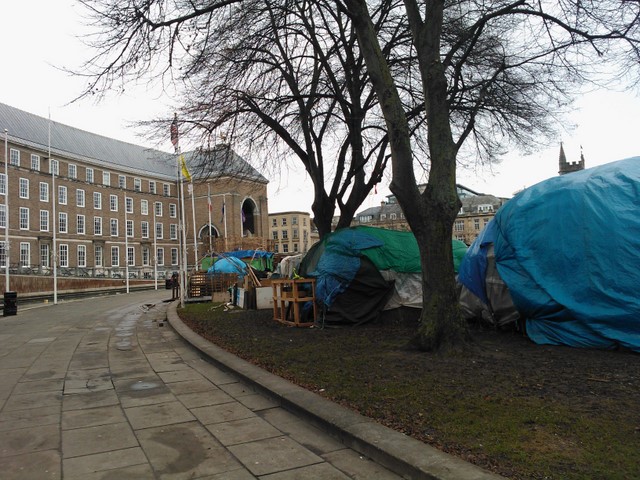