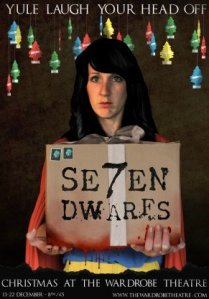 “Sner” White has lived her whole life in the shadow of her Disney namesake who for generations let down feminism with her weak behaviour. Kicked out of home at 16 by an evil stepmother she became a sexy and strong police officer who is just a little overemotional. This weakness led to her dismissal from the force while investigating the “12 days of Christmas” murders and shooting the suspect. But now the murders have started again and Detective White is needed once more.

While you might think that a production based on Snow White crossed with cult film Se7en is probably not quite easy on the stomach, the irreverence and humour of Se7en Dwarfs is beyond what you can imagine. The creativity of the production is brilliantly fun and utterly surprising when you consider the tiny theatre in which they are performing. (It’s very small.)

Emma Keaveney-Roys as Detective White is colourful and brash while sounding like a cross between a northern truck driver and a beautiful deposed princess. Adam Blake as Detective Bramley could have possibly carried off the whole show on his own but it was nice that he had the others with him too. Vince Martin did a beautiful job as musician and mouse. Oh and corpse.

The play is riddled with Snow White puns and pulls off some great genre-jumping with its Raymond-Chandler-esque Noir, Christmas movies, Leslie Nielsen-like deadpan ridicule and nursery rhymes combined with fairy tales. Definitely one for Jasper Fforde fans and for Prince ones.

Don’t miss it. This is the one Christmas show that should have its own feature film.

Se7en Dwarfs is Playing at the Wardrobe Theatre until 22nd of December, 2013.