Breakfast at Wallfish Bistro in Clifton

Two days ago, I had some black-looking thick and ugly mushrooms on toast at River Cottage Cafe. They were most unpleasant to look at with the grimy streaks they left on my place and weren’t exactly exploding with flavour. A week before that I had been served the most beautiful looking girolles on toast served with herby butter and arranged like little flowers around and top of a slice of sourdough.

The Wallfish in Clifton may only have started serving brunch for the first time last weekend but they were certainly miles ahead of the River Cottage on service and flavour. They were perhaps a little overenthusiastic with the drinks menu which I was handed as I walked in and all the cocktails listed on the breakfast menu are a bit daunting for 10am but nevertheless, I have become a big fan of their breakfasts.

Their baked beans are home-made and taste authentically country-farm (probably). They were lovely and smokey and have bits of bacon. I ordered them for my daughter but she was not impressed as they tasted nothing like Heinz.

I did wonder about the freshness of our bread as the delivery came in from Jo’s Bakery on Gloucester Road after we had been served but it was toasted and sourdough so I wasn’t surprised at needing a knife to cut it, it tasted ok. The water jug looked like a fish and glugged when you poured in a most pleasing way. I liked it. I’ll be back.

On Wednesday, last week, we went to visit Mersina’s childminder in Clifton. We then went by Papadeli where I enjoyed a delicious coffee and and a chocolate croissant while Mersina ate some of her plain croissant. It was lovely. 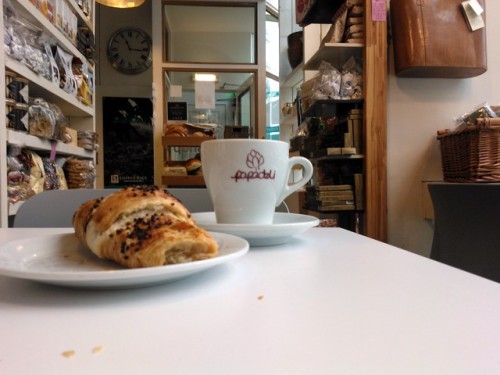 If any place was suited to host a fine dining experience in tea then it was meant to be Clifton and it could only be from Lahloo Tea.

The premises of what used to be Thaiphoon have been transformed into a light and open establishment set over three levels. There are seats upstairs and downstairs while just past the entrance there is a bench full of freshly baked cakes, scones and salads. Tarts, salads, eggs and cinnamon buns are all made in the little kitchen downstairs and there is a toaster available for some self-service snacks.

A bookcase is filled with jams made on the premises: strawberry and vanilla; lemon, grapefruit and orange; and cherry and ginger. Most importantly, there is a menu dedicated to the excellent loose leaf tea which varies from herbal, green and includes a Bristol Brew.

The highlight of my two visits so far has included the honey matcha latte made with soy milk (£3) and a cheese scone served with ricotta creme fraiche and chilli jam. Indeed, the latter also produced one of my saddest moments there, as I finished the scone while I still had chilli jam left but nothing on which to eat it.

On the last visit, my friend Matt ordered the banana bread which was served with a rich looking, almost orange in colour, butter. Enjoy some of his pictures.

Papadeli Cafe at the RWA 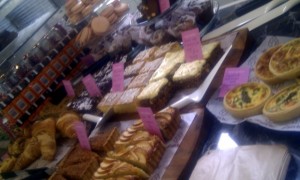 Papadeli is one of my favourite places for a coffee, a wander and some delicious food. Today they also set up shop a few hundred metres closer to me at the Royal West of England Academy.

The decaf, double shot, Americano was very nice and there is a selection of cakes, sandwiches and various other foods on the menu. The soup of the day was lentil with cumin while some crusty roll sandwiches had toppings such as prosciutto with tomato and rocket, and chorizo and goat’s cheese with rosemary. The rolls are £3.95 for take away and £4.75 to eat in. 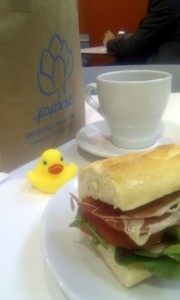 I enjoyed a superb brownie that was on par with the amazing one from Sourdough in St Nicholas Market and a sweet San Pellegrino soft drink.

Accessibility is great with a sloped entrance at the front and plenty of room inside for a pram. The cafe is divided into two areas. The store part is in one narrow room with a long bench that fits all the food and the cash register. There is a separate room with tables and cutlery which has high windows but is mostly closed off from the rest of the world. There are also three tables near the entrance to the art gallery but they don’t have too much of a view either.

It’s a lovely place for great food and coffee which are a bit of a treat at those prices but delicious nevertheless.

Data: in the eye of the beholder

A few weeks ago I was having breakfast at Primrose Cafe in Clifton. The sun was shining, the radio was on too loud, the place was crowded as usual and the conversation was almost flowing. In the midst of all this my companion made the point that there seemed to be more beautiful people in Clifton than there were, say, in Bedminster, and didn’t I think so? I looked around, and as the source of the comment was a single man, I tried to spot and remember how many young, slender, brunettes we had passed on our way.

He insisted that it wasn’t just about young women so I asked if it was related to age, are there more young people in Clifton? is it the clothes, the brushed hair, the jewelry, the make up, the colour of the skin, were there more white people? At this point he started to get a tad defensive at the suggestion that I might be calling him either shallow or racist or both. We didn’t get very far as he insisted he knew what beautiful meant and he didn’t have to explain it while I persisted with the thought that he should learn to quantify these abstract notions.

There’s always a chance that we were both somewhat wrong and right at the same time but I’ll stick to arguments that favour my own particular biases as this will be quicker.

. “Every revered object of beauty is considered ugly by someone, somewhere … There is so often the feeling that this, or that, particular form of beauty really does have some intrinsic value, some universal validity that simply must be appreciated by everyone. But the hard truth is that beauty is in the brain of the beholder and nowhere else” (pp 421-2).

Morris goes on to write of how humans are master-classifiers of information. When it comes to identifying beautiful and ugliness then he suggests that we have an internal classification and according to the properties we assign to this category we call something beautiful when it excels in those particular qualities and ugly where it doesn’t (p423).

This is where data comes into it because if we can identify characteristics it means that we can measure them and compare Bedminster and Clifton. I didn’t go ahead and measure them but I do know that when I think of people or places as beautiful or scummy or amazing or poor etc that there are plenty of biases that underline the concepts.

There are also plenty of sites which make data available on locations and which already provide categories.

Upmystreet.com is a website that uses demographic information to provide snapshots of areas. 1.4 miles separate the Royal York Crescent in Clifton from West St in Bedminster but in terms of household income, interest in current affairs and education there are vast worlds of difference.

I’m using demographics and upmystreet.com as examples of what data can add to meaning. There is a lot of information about data journalism at the moment and how it’s the new big thing and that can’t be a bad thing since apparently, “a lot of journalists are innumerate and a lot don’t know much about history” (CJR). What I think it comes down to is adding a meaning where facts just aren’t enough and by the way, without context, facts may be sacred by they are rarely enough.

When the Guardian advertises its credentials in promoting the West Country and suggests that Bristol featured in their [readers’] top ten UK cities in the 2009 Guardian and Observer reader Travel Awards you would probably not need help to figure out that Clifton features more than Bedminster. If you weren’t from the South West or Bristol, however, there is a fair amount of data out there that would help you figure it out and that’s the beauty of it.

On a pedestal in Clifton, kinda

On a pedestal in Clifton, kinda, originally uploaded by still awake.

Chipotle chilli mayonnaise for £3.00 and lavender rice pudding for £3.50 are just two of the reasons that make the Arch House Deli a special treat to visit. The varied, and mostly imported, products in this emporium mean that it is extremely colourful but also slightly out of reach in terms of cost.

Some events that are a little more accessible are the frequent tasting events which are hosted there such as the free Strawberry Hill Vineyard wine tasting two days ago and a free cheese tasting nine days ago with cheese connoisseur Emma Johnson.

Freshly prepared food is available from the cold counter and this includes a wide variety of cheese and pastries while there are freshly baked cakes on the large table in the centre of the shop. All look delicious and most importantly the selections can be quite unusual. However, trying one of each of the lovely offerings would be a bit too expensive so sometimes the easiest choice is the cafe.

A cup of the decaffeinated Lahloo Rosebud tea costs £1.65 and is served in the heavy, individual tea pot recommended by the company. The tea is delicate and contains actual rose buds. 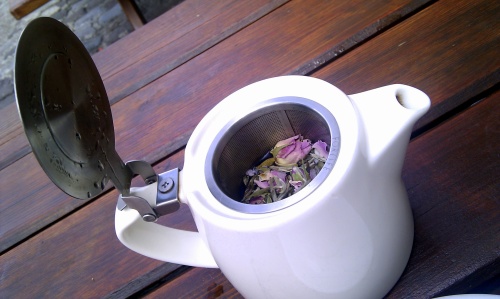 There are tables just past the shop area, in front of the deli and around the side of the building in the alleyway. On a Tuesday morning the only thing to spoil the quiet of Clifton was the kitchen right next to the tables in the alleyway where two women kept up a constant stream of gossip and singing.

I probably wouldn’t spend hours there, but for a touch of magic and creativity, it’s a nice little place in which to browse and discover new things. The Gustosecco lavender rice pudding is something I hadn’t heard of before but would love to try. The packet contains all the dry ingredients necessary to infuse with milk and then bake in the oven. Apparently it goes well with poached peaches in syrup.