An official Bristol baby but where’s the drama?

Dad and I almost had a Jeremy Kyle moment last Saturday.

We were at the registry office on Corn St to register the baby’s birth. The calm and well spoken woman first took my details and added them to the computer. She then turned to dad and asked him to confirm that he was the father.

That was it. That would have been the perfect Kyle or Jerry Springer, or even a Buffy in Once More With Feeling moment, where I could have said something exciting, changed the course of the day and the future. I didn’t have anything to say though. We kind of half laughed, made a joke and carried on in good spirits. After all, registering a baby and signing a legal declaration in ink which has been created with the same formula since the 1800s, when birth registrations began, is not exactly a common thing.

An opportunity to participate in a storyline fit for a soap opera doesn’t come along too often in life either. I’m not disappointed that my life is quite content at the moment, it’s more that I had been expecting a little more drama. I say expecting, I mean trying to tiptoe to the corner of this moment in life to take a sneaky peek at what may be coming up next.

I love making predictions because I have never yet been right. My favourite fate questioning moment so far is my post on running dated May 20 where I finish off with the line “I hope that wasn’t the only highlight of my year because there are still over six months left.” I was referring to the London Marathon and unbeknownst to me at the time I was already pregnant.

Ha! is what I say to the person who wrote that post. I love irony. I don’t always like drama and yet I don’t want to settle into normality just yet either. Saying that it may not be as normal as I think. To get to the appropriate office I went up to the higher level with the pram in the lift while dad and nice woman went up some stairs. On the way out of the building, dad was holding the baby to soothe her while I pushed the pram. We arrived at the lift / stairs separation and dad and baby moved on without me. My heart stopped for just a dash longer than usual. I wasn’t prepared to be away from her and was not ready to see him walking off with her in his arms.

Officially dad is the father and I am the mother of this little Bristolian baby. We signed the papers but skipped heartbeats suggest that we haven’t yet achieved normality. 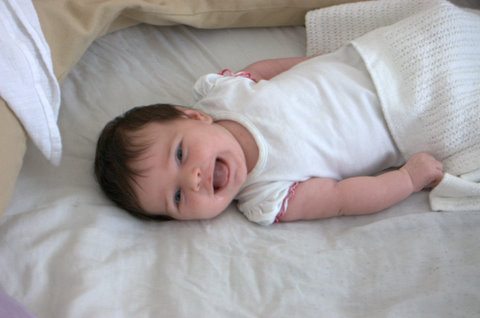