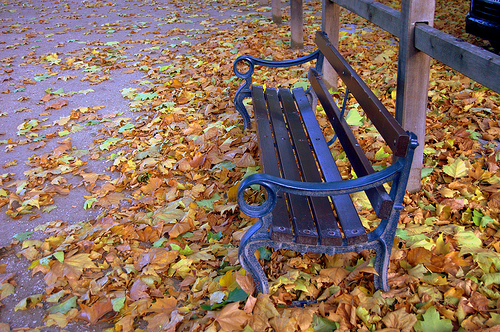 The Hole in the Wall is a traditional pub set near the dockside of Bristol. It is right on the corner of Queens Square, just off the Centre, and is a short walk from Redland, Clifton and Kingsdown.

I passed by yesterday on the way home and instead of seeing a gaggle of businessmen (and women) loitering out front, there was only quiet and a blackboard.

The writing on the board says:

We are closed whilst we make our pub better and brighter!

The pub offers both food and drink, including real ales, although I have only ever sat outside with a Corona while enjoying the sun.

Maybe tomorrow I’ll try the champagne. See you there.

Friday night in Bristol and it’s after 9 o’clock by the time a friend arrives to visit for the weekend. We stop off for a quick drink in the Big Chill Bar and they have just stopped serving food. We decide to try out El Puerto, a tapas bar opposite the Arnolfini, for some food although some friends have just gone for dinner at Graze. The Spanish restaurant is too full to even wait around for a table and we watch the couple in front of us get turned away. We pass by the helium balloons of the leaving party next to the door and head out and back to Queen Square to join the friends.

The time is after 10 by now and the group we join has just ordered but the staff at Graze are more than accommodating. They immediately move us all to a bigger table, ask if we all want to eat at the same time and with a slight encouragement for us to order soon they adjust and it all flows smoothly. Out of habit I order the house red and it turns out to be a light though not too mellow grenache, it was a nice selection. As a Bath Ale gastropub it seemed only suitable that three of the guys ordered the Gem Wild Hare (green label). The table was by the window and easily seated seven of us. The atmosphere was pleasant and even though Graze was nearly full there was no distraction from other noises.

Four sirloin steaks (£15.95) were ordered and there are six choices of sauce such as green peppercorns and brandy, port and Stilton, and a type of mustard sauce. I chose the Cornish Pollock (12.95) which came with curly leaf kale and some other red bits of salad.

One person ordered the duck breast and was very complimentary. The steaks were quite thick and cooked to personal taste and were served with a side of triple cooked chips. 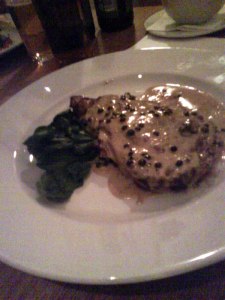 I ordered some of the chips as well and they were very tasty. Not sure what the triple cooked part means but the chips have a thick crust and while they looked overdone they didn’t taste it. 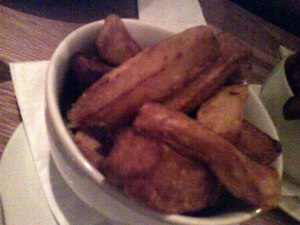 Since we were so late to dinner we didn’t order a starter but I wasn’t willing to skip dessert. I don’t consider it a proper meal without at least two courses, preferably three. The last time I was at Graze it was for four hours on Christmas eve and my meal at that time was finished off with an amazing crème brulee. Surprisingly,the creamy custard part was slightly chilled and with a layer of mixed berries at the bottom. I wasn’t sure if I should be affronted at being tricked out of my usual favourite dessert but it was delicious. I hate to give away such an intriguing little surprise but it would be a shame to keep it secret. 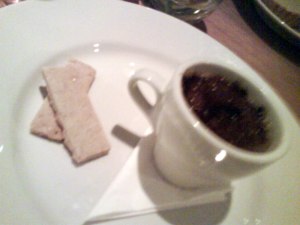 Last night’s intriguing little version of the creme brulee was a banoffee one and it was served in a little pot with a smokier than usual burnt sugar crust. The delicious and delicate tasting toffee cream part sat on top of a layer of banana sweetness which was more fruit puree than syrupy goo. That is definitely going on my list of favourite desserts.

The cheese board that some friends ordered was incredibly varied, not only in terms of cheese but also a fun selection of bread and crackers.

Graze may not be the culinary extraordinary experience of places like Flinty Red or the Glassboat but it’s comfy and relaxing and the food tastes good. I think of it as a lovely choice right in the city centre and next to the beautiful Queen Square.

Saturday morning is my favourite time of the week. My body hasn’t yet realised it’s the weekend so I am awake at 6am and waiting for the world to light up. By 6.30 I’ve decided to replace what would have been a morning run with a cycle around the city. So quiet outside and the light is golden but thin. I find my helmet in the living room, hidden behind some books still in a box and I find a pair of gloves right next to it. I take both and head out the door.

I take the lock off the bike and put it in my bag but half way out of the car park I realise that my right hand is colder than my left. I look down and I’m only wearing one glove. I retrace my steps and can’t find it so I put my second pair on and leave the rest to confusion. I’ll worry about it later.

I head out towards Bristol Temple Meads so I can time the journey. I spend the next nine minutes cycling through Millenium Square, over Pero’s Bridge and through Queen Square. 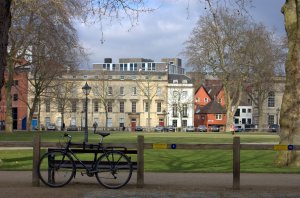 I saw the sun shine golden behind St Mary’s Redcliffe, and icy frost on the Bridge past the Welsh Back.

I hadn’t realised that the road leading up to the entrance of the station had such an incline (tiny probably!) and when I walked through the station and towards the exit on the left my legs felt like they’d been doing some exercise.

Back towards the harbour and I circled Queen Square before cycling towards the water. There was no one around Hotwells apart from some rowers who were putting in a lot of effort for that time of the morning and a couple of women who looked like runners but were walking on this leg of their journey. 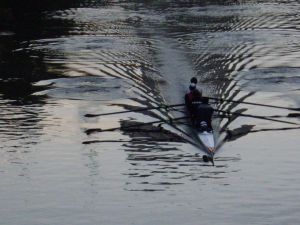 By the time I got home an hour had gone by and my little glove was lying next to the bike stand. I must have been so excited to be out and about that I hadn’t waited to put it on. Intriguing but unsurprising. I couldn’t go out running so cycling was a second choice but in retrospect and as Ben Taylor sings “as luck would have it, it just so happens there’s nothing I’d rather do”.

I had my breakfast looking out towards the Bristol Cathedral and trying to think of something fun to do for lunch since it’s looking like a beautiful day. Tonight’s dinner will be at the surprise pop-up restaurant in Daydream Kitchen’s living room. So many hours to fill between breakfast and dinner however.